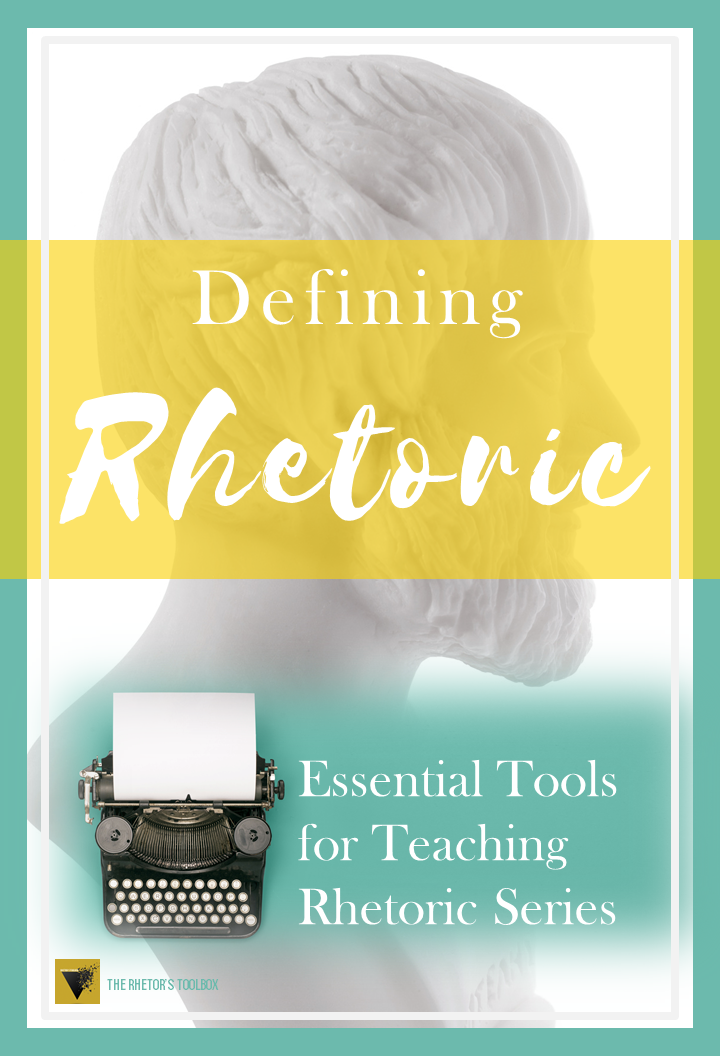 What are the essential tools for teaching rhetoric and rhetorical analysis? This blog series will explore one tool each week.

What, exactly, is rhetoric? Let’s survey the conversation around how to define this concept.

Aristotle is the father of rhetoric and rhetorical analysis. His classic writing, The Art of Rhetoric, is foundational to our current understanding. Here are a few notable statements from Aristotle.

Rhetoric may be defined as the faculty of observing in any given case the available means of persuasion.

Of the modes of persuasion furnished by the spoken word there are three kinds. The first kind depends on the personal character ofthe speaker; the second on putting the audience into a certain frame of mind; the third on the proof, provided by the words of the speech itself.

The duty of rhetoric is to deal with such matters as we deliberate upon without arts or systems to guide us, in the hearing of persons who cannot take in at a glance a complicated argument or follow a long chain of reasoning.

Aristotle, along with a number of other Greek philosophers and teachers, understood rhetoric as oratory. In the following centuries, the popularity of rhetoric as a study ebbed and flowed, with many individuals contributing to what we now call classical rhetoric.

Modern rhetoric represents a shift from rhetoric as a study in elocution toward rhetoric as an exercise in civic engagement. This idea is in great part influenced by mass media. Here are a few perspectives of rhetoric from major contributors to modern rhetoric:

Caïm Perelman: “Since argumentation aims at securing the adherence of those to whom it is addressed, it is, in its entirety, relative to the audience to be influenced.”

Kenneth Burke: Rhetoric is “a symbolic means of inducing cooperation in beings that by nature respond to symbols.”

Marshall McLuhan: “The medium is the message.”

Modern theory generally suggests that rhetoric is a response to situational exigency. Rhetorical analysis and rhetorical criticism thus must consider individual and cultural influences on the speaker, as well as the methods of persuasion employed.

The Oxford English Dictionary defines rhetoric as “the art of effective or persuasive speaking or writing, especially the exploitation of figures of speech and other compositional techniques.”

With such a complex history, the concept and study of rhetoric can be hard to communicate to students without oversimplifying. Perhaps one of the best ways to help them define rhetoric is to allow them to synthesize multiple descriptions of rhetoric, focusing on the nuanced perspectives. The expert quotations above are a good starting point, and here are a few more:

Mary Astel: “The design of Rhetoric is to remove those Prejudices that lie in the way of Truth, to Reduce the Passions to the Government of Reasons; to place our Subject in a Right Light, and excite our Hearers to a due consideration of it.”

Plato:  [Rhetoric] is the “art of enchanting the soul.”

Andrea Lunsford:  “Rhetoric is the art, practice, and study of human communication.”

What’s next in the Essential Tools for Teaching Rhetoric Series? A little intro to the rhetorical situation. Check back next week!