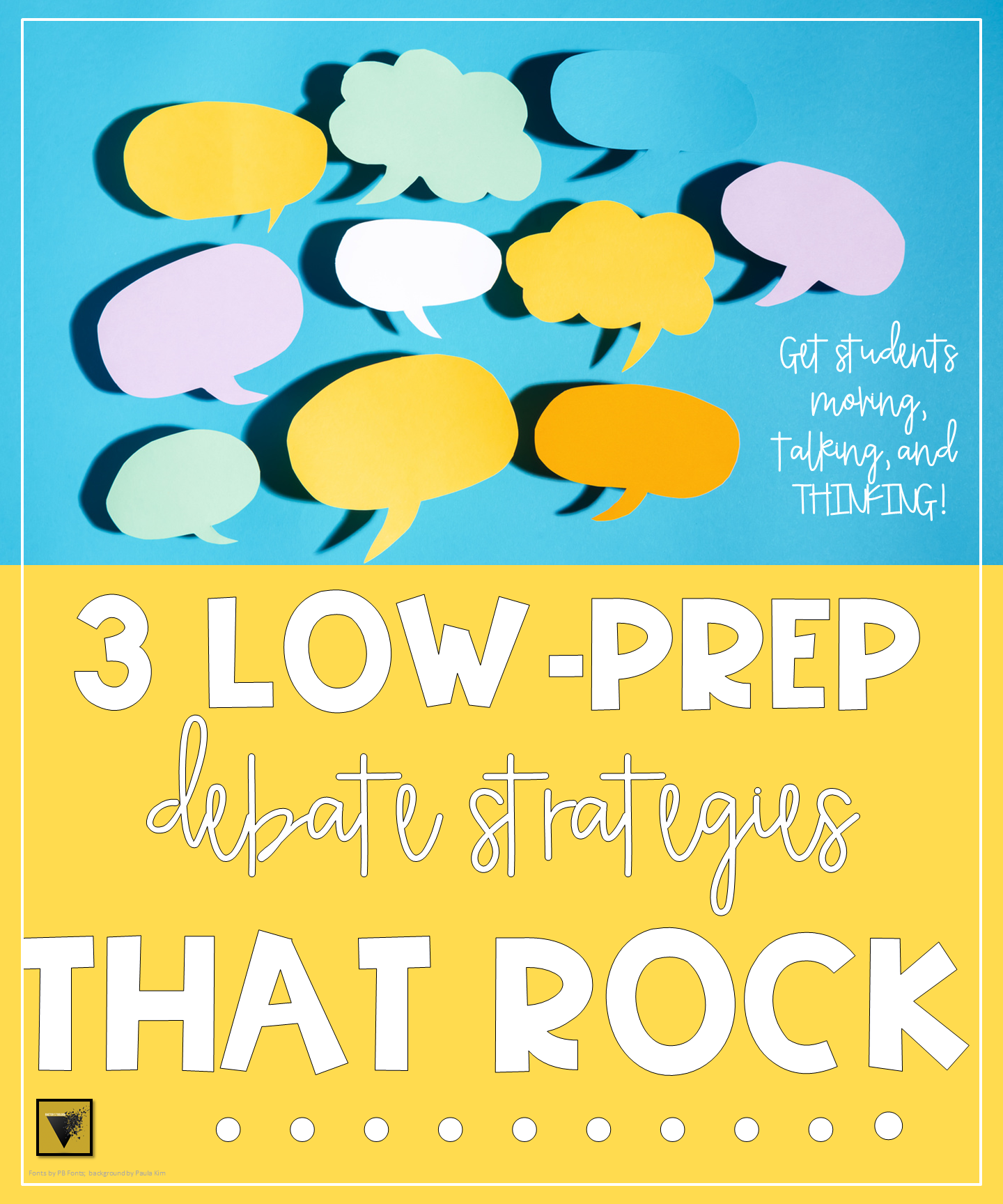 One of the best ways to get students engaged and practicing rhetorical strategies is to get them up and talking. The more they can be opinionated, the better! Here are three of my favorite low-prep debate strategies, perfect for any time during the school year.

Prep: Make four signs: strongly agree, agree, disagree, strongly disagree. Hang one sign in each corner of the room. Come up with the debate topic in the form of a statement.

How to Rock It: Project or state the topic, and give students time to free-write about it (five minutes or so). Begin the debate by having students move to the corner that best reflects their views. The groups that are gathered at each corner get three minutes to discuss their reasons for their stance and determine which would be most persuasive to others. A spokesperson for each group will present a one-minute argument for joining their group. As they speak, students may move to join different corners as their views change. You can choose to allow groups to present counter arguments. This is especially fun when students make it competitive and try to recruit as many students from other corners as they can. Afterward, have students discuss/reflect on questions like these:

Prep: Come up with 3-5 silly debate topics. Be ready to project each topic (one at a time). Project or make copies of the questions for peer feedback.

How to Rock It: Divide students into groups of three and have them determine who is person A, B, and C within each group. They must keep these roles. Introduce the debate topic and assign a role to the As, Bs, and Cs. Two students will debate, and one student will judge the debate and provide feedback. Your job is to keep time and facilitate the process. I suggest this timing:

After each round, the roles will rotate: As become judges, Bs become affirmative, Cs become negative, and so on. All students should have an opportunity to take on each role. After you exhaust your topics, it’s time for students to debrief and reflect. Some suggested prompts:

Consider two class periods for this one: the first to rotate and write, the second to debrief and reflect.

Option A: Copy the same debatable statement onto 6-8 pieces of chart paper.

Write the question in the center of the paper and leave lots of room for students to write around the outside. Hang the chart papers around the room.

How to Rock It: Divide students into even groups (based on the number of chart papers), and give each student a marker. Assign each group the the affirmative or negative stance. Spread groups out so each group starts at one poster. Each group will have a set amount of time to silently write an argument for or against that debatable statement on the chart paper. At the end of the time, the group will rotate. At the next chart paper, the group will silently read the previous comments and build on/respond to the arguments made by their peers–but they have to argue as the affirmative or negative as assigned.

Once the groups have rotated through all the posters, have them return to their original posters and read through the arguments that developed. Potential reflection questions:

If you’re interested in some teaching resources for debate and argumentation, you might check out Constructing a Debate and The Game from my Teachers Pay Teachers store.