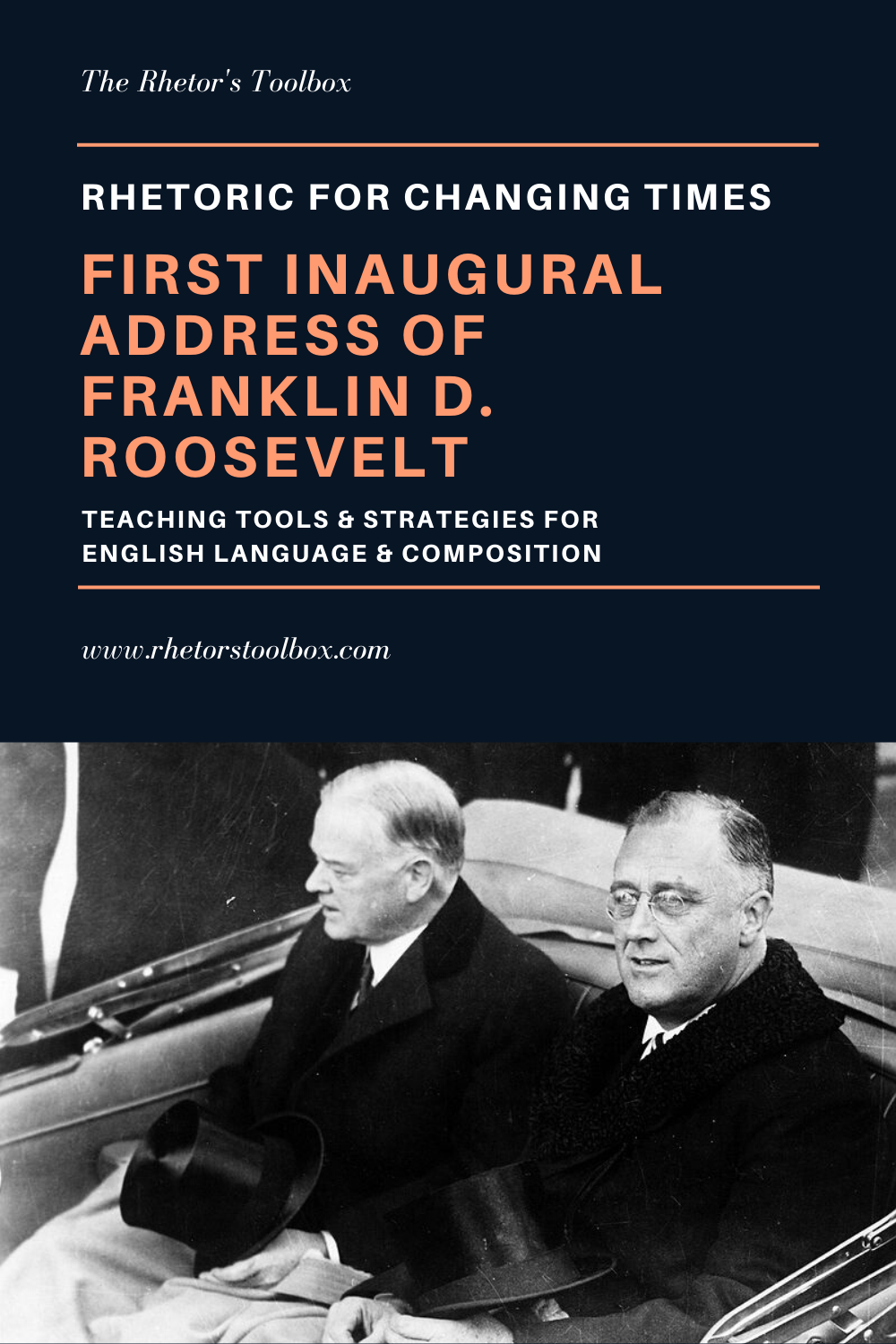 This post is part of the series The Rhetoric of Changing Times, a collection in response to the COVID-19 pandemic and its global consequences. In this series, we’ll look at poignant historical speeches and documents and examine questions and topics for discussion/writing. Feel free to share your thinking in the comments or assign these questions to your students. Speeches will generally be linked due to copyright laws.

Lessons of the Past

Radical, fractured, crippled, dangerous–when I skimmed the news headlines today, these were the words that dominated the headlines. As I’ve been social distancing at home over the past several days, I’ve spent time thinking about moments in the past when people experienced devastating events. What messages did they hear from their leaders, and did they trust and follow that guidance? How did their leaders’ words help (or attempt to help) the people adapt to change? What reserves of character and strength did the leaders appeal to encourage or inspire them? How did their leaders balance the solemnity of the moment with the promise of the new day?

One such occasion in American history was March 4, 1933. On that Saturday afternoon, Franklin D. Roosevelt addressed America for the first time in his capacity as President (read the full text of his speech here or watch it here). In his speech, he touched on many of the concepts I listed above.

In the sections below, I’ll spend a little time looking at the rhetorical situation, examining key quotations, and posing questions for students.

Let’s start with the rhetorical situation. What are the critical elements of exigence, audience, speaker, purpose, context, and message?

Here are some questions to probe further (based on Kaplan’s Depth and Complexity prompts):

Now, let’s dig in to a couple of key statements. I’ll give a model, then I’ll pull a couple of quotations and ask my go-to guiding questions.

So, first of all, let me assert my firm belief that the only thing we have to fear is fear itself–nameless, unreasoning, unjustified terror which paralyzes needed efforts to convert retreat into advance.

In this sentence, Roosevelt plays with grammatical structures to communicate complex ideas. Note its many parts: the appositive (“first of all”), the repetition of “fear”, the use of the em dash followed by a list, the precision of verbs (“paralyzes” and “convert”). It’s worth noting that the phrase “the only thing we have to fear is fear itself” is a common quotation on its own. Let’s look at this sentence in two parts: before and after the dash. The independent clause before the dash establishes Roosevelt’s strong yet concerned tone through words like “assert” and “firm belief.” Roosevelt also establishes fear as a separate entity, disconnected from the people, by using the reflexive term “itself.” He is careful not to give his audience ownership of the fear. After the dash, a dependent clause provides additional information about fear. Roosevelt first provides a list of what fear is not, suggesting that when a person is unable to name, reason logically, or justify the cause of fear, a person is thus taken over by that fear. Roosevelt suggests that being overcome by such fear “paralyzes” a person’s ability to take “convert” or change course from flight to fight. With this phrase, Roosevelt seems to acknowledge that fear might initially lead a person to “retreat” or flee, but he believes that effort and reason will overcome that first instinct.

These dark days will be worth all they cost us if they teach us that our true destiny is not to be ministered unto but to minister to ourselves and to our fellow men.

It is the insistence, as a first consideration, upon the interdependence of the various elements in all parts of the United States–a recognition of the old and permanently important manifestation of the American spirit of the pioneer. It is the way to recovery. It is the immediate way. It is the strongest assurance that the recovery will endure

Before wrapping up a text, I always like to make sure students have an opportunity to share their own thinking about the texts we’re working with (beyond analysis). Some potential journal or discussion prompts:

Have your students worked with this speech? What questions and teaching points would you suggest?

Additional Resources: You can find my blog post on questioning here, rhetorical analysis-specific questions here and my TPT resource for teaching questioning strategies here. You can find resources for close reading in my TPT store here.

One thought on “The Rhetoric of Changing Times: First Inaugural Address of Franklin D. Roosevelt”